As part of Project Crossover, this wiki is scheduled to be archived in favor of the Fandom equivalent. If you object to this wiki being archived, please say why on the community portal discussion page. If there are no objections by June 6, 2020, this wiki will be archived.

Please take a moment to fill out this survey on your gaming habits!

From The Evil Within Wiki
Jump to: navigation, search 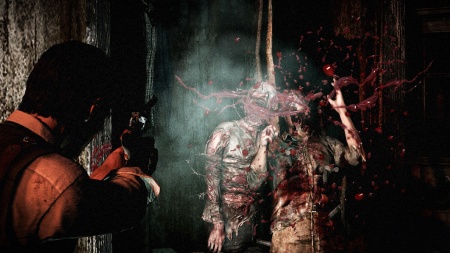 The Haunted of The Evil Within are enemies regularly encountered by Sebastian Castellanos.

The Haunted are the main enemies encountered by Sebastian Castellanos. They are often designed specifically to be as gruesome and grotesque as possible, with designs heavily favoring nails through the skin, barbed wire wrapped bodies, bleeding orifices, and more. They are patients of Beacon Mental Hospital that have succumbed to the various experimentations performed by Ruvik and his staff. Team member Shinji Mikami has said that they have undergone grotesque mutation, and are merely expressing the evil of Ruvik and their internal demons through external means. Some haunted have glowing eyes, which typically indicates they are more powerful than their regular counterparts.

The Haunted are typically somewhat easy to dispatch - because they move in a slow haze, they are often easy targets, though certain Haunted have the ability to run and sprint at a moment's notice, so the player should never take this for granted. They can wield weapons such as knives, bottles, axes, shotguns, and more, but are typically fond of using their sharpened appendages and bare hands. Failing to shake off a Haunted engaging Sebastian in a physical struggle results in massive, unavoidable damage.

Dealing with The Haunted[edit | edit source]

The Haunted can be formidable, and though there are a variety of ways to deal with them, one simple tip can help you survive the majority of The Evil Within - go slow. While traps can be bypassed in stealth, perhaps the best benefit of slow and quiet movement is the fact that The Haunted rarely sense you. This means you can stealth kill them, which in addition to instantly dispatching them also saves your ammo. Because ammunition and firearms are best reserved for dealing with the various Bosses, conserving when and where you can is the best policy.

Additionally, The Haunted can be easily tricked using bottles. When using a bottle, throwing it far away and hiding in the shadows will often clear a path, allowing you to traverse an area that would otherwise be flooded with enemies. While this is not always a choice given your environment and materials on hand, it is a useful method when it presents itself.

When you can't get around them, such as is the case in various rooms where The Haunted flood after performing a task or clearing a puzzle, your best bet is going to be fast movement. Once you've made sure the room is clear, dodging and circle strafing will allow you to dodge the majority of attacks. Focus on the highest danger Haunted first, specifically those with weapons or items, and then move to the lesser Haunted, those who are using only physical attacks. This should limit your exposure to danger and allow you to dispatch your enemies with relative ease.